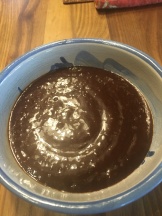 I made this BBQ sauce and used it on chicken and ribs and it was so delicious. I put it into a bell jar and kept it in the refrigerator for a week. There are a lot of ingredients but it’s worth the effort. Nothing but good old fashioned ingredients. We like it spicy so this has a lot of kick because of the chipotles in adobe sauce, if you want it to be milder use only 1 chipotle or none.

2 chipotles in adobo sauce,  roughly chopped–you can eliminate this if you don’t like it spicy or cut in 1/2

Heat the oil in a medium saucepan over medium high heat. Add the onion and cook , stirring occasionally, until onion is nice and soft, depending on your stove top anywhere from 5-8 minutes. You just want them very soft and translucent not browned.

Add the garlic, and cook stirring till garlic looks softened , another few minutes. Add 1/2 cup water and the ketchup. I mixed the water and ketchup before adding.

Add the molasses, vinegar, Worcestershire Sauce, allspice, clove, chipotles and 1/2 tsp. kosher salt and bring all ingredients to a low boil. Reduce the heat, and bring to a slow simmer, stirring occasionally. It will start to thicken up in about 10 minutes or so. I let it cool a little bit and the put into the blender until it was smooth. Store the sauce in the refrigerator until you’re ready to use. This sauce can be made up to a week in advance.

This particular night I made BBQ chicken–dark meat. I used thighs and legs.

I dried off the chicken on some paper towels. Prepared my grill by spraying well with Pam Grill Spray or whatever you like to use, you can also oil the grates.

Separate about 3/4 of a cup of  sauce for basting . You don’t want to cross contaminate raw chicken with sauce that you may want to use . I place the remainder of bbq sauce in the refrigerator and put some in a bowl for serving.

Reduce the grill to low. Cook the chicken covered, turning and basting with the BBQ sauce every 5 minutes or so, until the chicken is cooked through, about 25 minutes. Check doneness with a meat thermometer or cut into it.

Throw away any sauce that you used on un-cooked chicken.

This entry was posted in Uncategorized. Bookmark the permalink.