Easy Peasy Chicken on the Grill

Easy Peasy Chicken on the Grill 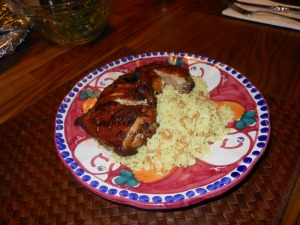 Here is a very simple marinade made with very few ingredients. Most of the ingredients you probably already have on hand. I had the chicken and I actually had the beer which is what prompted me to make this. I also have to say that the thighs tasted better than the plain, boneless chicken breasts. I cooked the chicken on the grill at a lower heat. It took a little longer (maybe 20 minutes) but the thighs were moist and delicious and I didn’t blacken the skin because the grill wasn’t so so hot.

Salt and pepper to taste

4 skinless, boneless chicken breasts or chicken thighs with skin on and bone in. (I would have the butcher cut them in half.)

This marinade yields a lot so you could probably make up to 8 pieces (at least) of chicken.

In a large bowl, mix the soy sauce, beer, water, garlic, brown sugar and ginger. Place the chicken in the bowl. Cover and marinate for 6 hours or overnight. Turn chicken a couple of times while marinating. Right before I put the chicken on the grill, I sometimes sprinkle a little kosher salt and pepper. The soy makes it somewhat salty but the beer dilutes the soy so I think it’s personal but I suggest adding a little salt and pepper. You can also cook up the chicken and taste it and sprinkle a little sale and pepper, if needed, before serving.

Place chicken on the grill and cook approximately ten minutes per side, depending on thickness of cutlets and your grill but until the chicken is no longer pink and juices run clear. Discard the remaining marinade. Be careful to watch the grill–you don’t want to overcook chicken (unless you specifically like it that way). I watched the thighs very carefully, turning often so that they didn’t blacken. They came out beautiful and were very moist for you dark meat lovers.

I served this with rice pilaf and my string beans (see recipe).

This entry was posted in chicken. Bookmark the permalink.

4 responses to “Easy Peasy Chicken on the Grill”